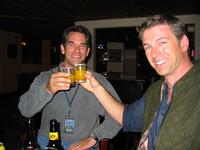 We studied the diet of green sea turtles (Chelonia mydas) at Bahía de los Angeles in the Gulf of California, México. From 1995–1999, we collected esophageal lavage and fecal samples from live-captured turtles and analyzed stomach contents from stranded carcasses encountered in the study area. Foods ingested did not vary with carapace length. Turtles consumed diverse marine algae, with the filamentous red algaGracilariopsis lemaneiformis the most abundant; other common genera included Gracilaria, Codium, Ulva, andChaetomorpha. Turtles also augmented their diet with animal matter; 25 nonalga food items were identified, including sponges, tube worms, sea pens, and sea hares. Substratum and anthropogenic debris such as plastic bags and nylon cord were commonly recovered in diet samples.

The increasingly popular Blue Mind Therapy claims that the meditative state we fall into when near... continue

“The real voyage of discovery consists not so much in seeking new territory, but possibly in... continue