May 23, 2010, Greencastle, Ind. — "You are making the changes that inspired me" to become a scientist and conservationist, Wallace J. Nichols III, a 1989 graduate of DePauw, told the University's Class of 2010 at this afternoon's 171st commencement. In his address, "You Are Lovers and Fighters," Dr. Nichols commended the 485 graduates for their generation's commitment to improving the environment and challenged them to continue working to make the world a better place.

The ceremonies took place under hot, sunny conditions in Holton Memorial Quadrangle.  The 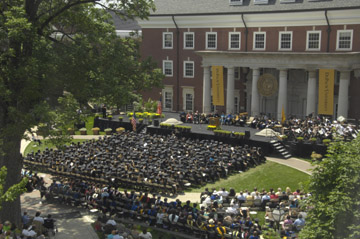 temperature was 86 degrees when the program began at 1 p.m.

J. Nichols (he goes by his middle initial) is a research associate at the California Academy of Sciences and is responsible for pioneering research on the migration of sea turtles. He noted that the Class of 2010 has demonstrated great love for their parents, their college and their planet.

[Download Video: "Lovers and Fighters" - 1312kb]"But you're also fighters," he stated. "You've fought hard to reach this day, to graduate from college after almost two decades of schooling. You've fought to make your campus cleaner and greener and your world more just. On campus, in the classroom, on the tracks, the courts and playing fields, as you travel the world, you fight for what you believe. For what you want. You fight for the things you love. That's why you are lovers AND fighters."

He recalled arriving at DePauw as an undergraduate a quarter century ago, and told the crowd of how he snorkeled in the old (and quite shallow) Bowman Pond, explored cemeteries and state parks, played guitar at the penitentiary and learned about the plants and animals which can be found on campus.

[Download Video: "Discovering His Passion" - 1019kb] "I left knowing that I had squeezed every experience and every opportunity from DePauw," Nichols asserted. "I had sucked the marrow out of this place, as Thoreau might say. And at that moment, I had discovered my passion. I wanted to fix what was being destroyed, plain and simple. I'll tell you, there's no greater gift than to find your passion."

That process of discovery was aided, according to the scientist, by the release of Bill McKibben's book, The End of Nature, during Nichols' senior year at DePauw.

[Download Audio: "McKibben's Message" - 281kb] "I read it. I re-read it. And I probably read it again.McKibben described the destructive path that we were on and the consequences for life on Earth if we didn't move decidedly and strongly towards sustainability and away from our addiction to fossil fuels. Two decades later, what Bill wrote has come to pass, much faster than he predicted." 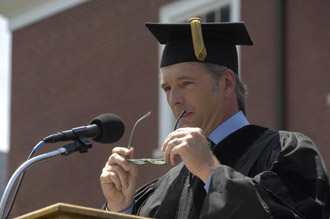 Nichols went on to earn a Master's of Environmental Management degree at Duke University and Ph.D. in wildlife ecology at the University of Arizona.  In addition to his role at the California Academy of Sciences, Dr. Nichols has served as a senior research scientist at the Ocean Conservancy, as conservation science director for ProPeninsula, and on a global bycatch study with Duke University and Blue Ocean Institute.

"Little did I know that snorkeling in Bowman Pond, scuba diving in the quarry, writing forThe DePauw and ravaging Marvin's burritos were preparing me to be a marine biologist studying sea turtles in Baja, Mexico," Nichols joked.

In 1996, Nichols became the first researcher to attach a transmitter to a Baja sea turtle and track it as it traveled from Mexico to Japan. In 1998, he founded the Grupo Tortuguero, an international grassroots movement dedicated to restoring Pacific sea turtles and to sustainable management of ocean fisheries. In 1999, he co-founded and for five years directed WiLDCOAST, an international conservation team dedicated to the protection of coastal wilderness.

He serves on the boards of Animal Alliance, Coastwalk, Drylands Institute, Oceana, Reef Protection International and Save Our Shores.  His work has been featured in National Geographic, Scientific American,TIME and Newsweek, and he was seen in Leonardo DiCaprio's documentary, The 11th Hour. Nichols was cited as an  "eco-all-stars" by Outside magazine and was recently named one of the "Greatest Ocean Heroes of All Time" by the Daily Green. He is a regular Huffington Post contributor and is featured on the cover of the June 2010 issue ofExperience Life magazine.

According to Nichols, "My work is to study and protect the ocean, the single greatest living feature of our planet. Our team has tracked sea turtles swimming the ocean's widest expanse, 6,000 miles from Mexico to Japan. And we scuba dive in places with animals a bit 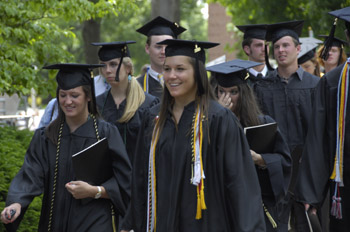 more exotic than the carp in Indiana's quarries, and better visibility than Bowman Pond.

[Download Video: "Nichols on His Work" - 839kb]We've been challenged to think about how to clean up a continent-size part of the ocean polluted by bits of plastic accumulated over a hundred years. We're also exploring the neuroscience behind how the feel, sight and the sound of the ocean can calm, renew and heal our bodies and minds."

worst environmental disaster is unfolding in slow motion in the Gulf of Mexico. Sea turtles are the poster species for this oil spill as well as the revolutionary response required of us going forward."

The scientist stated with pride, "Today, our University is a national leader in the subjects of sustainability, environmental ethics and socio-ecological problem solving."

To the seniors who would be receiving diplomas in a matter of minutes, he asked, "What does being a lover and a fighter make you? It makes you an activist. Because activists ... ACT ... they fight for what they love. You know in your gut that there isn't time to mess around. You join organizations and groups. You start campaigns.

You discuss and argue and analyze ... and then you act. Like it or not, we are all activists now, because the ocean is burning."

Each member of the audience received a gift from the primary speaker: a blue marble.  He asked the crowd, "Hold it at arm's length. Peer through it's glass. From a million miles, Earth -- our home -- would look about the size of that small blue marble."

[Download Video: "Beautiful Blue Marble" - 1842kb] "On this blue marble we call Earth, every being who ever lived was born and finished their lives. Every mother and father. Every hopeful child and college graduate. Every oil executive and environmental activist. Every dinoflagellate, every dinosaur, every sea turtle, every mountain lion.Every single burst of passion and firing neuron that fights for what it loves has lived on just one planet. This lone, beautiful blue marble spinning in the vast emptiness of space; this Earth -- our one and only blue marble -- is where we must make our stand."

[Download Video: "Embracing the Passion" - 1803kb] "So while were here together on this Earth, we may as well fight for what we love because, as far as any of us knows, it's our only home. My hope is that you find and hold on to the passion that keeps you awake. The kind that sits you bolt upright in bed in the middle of the night with the excitement of your own ideas. My hope is that you will continue to fight for what you love. I've given you this simple gift of glass, a blue marble, to remind you of what you already know. That the best things life has to offer are worth all the love and all the fight that you can muster."

[Download Audio: "Reason and Emotion" - 473kb]"You are well on your way to finding your passion. It's my sincere hope that it has something to do with healing what is broken on our planet today, whether your focus is on the environment or fellow human beings. To do that, you must feel things ... deeply. Don't rely so much on reason and logic. It may seem funny that a scientist would tell you that. But it is the neuroscientists who taught me that we can't have reason without emotion. That all of our decisions are based in emotion, whether we like it or not. Understanding this -- how your own brain works -- in the context of human evolution and the history of the universe deepens our love and empathy for each other and all of life. This is the nugget of truth in our fight for the blue planet."

As he concluded his address, Nichols advised the Class of 2010,

[Download Video: "Final Thoughts" - 1443kb] "Don't be afraid -- just love and fight. Keep your cool, maintain your center. But love and fight, fight and love. And do it with everything you have. Because you are lovers and you are fighters. Congratulations, and good luck."