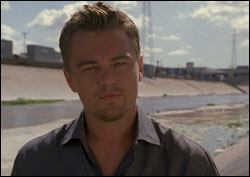 True to its doom-laden title, global-warming doc "The 11th Hour" presents the viewer with reams of depressing data, loads of hand-wringing about the woeful state of humanity and, finally, some altogether fascinating ideas about how to go about solving the climate crisis. Co-produced and narrated by Leonardo DiCaprio, this latest exercise in celebrity eco-activism lacks the personal touch that helped "An Inconvenient Truth" go green at the box office, but auds might warm to its layered insights and polished presentation, given careful nurturing by Warner Independent and effective showcasing as an educational tool.

DiCaprio and first-time helmer sisters Leila Conners Petersen and Nadia Conners scripted the film's text -- an earnest, sometimes clunkily verbose set of warnings about the dire state of the planet, which DiCaprio more or less recites at the camera. Narration is supplemented by a rapidly edited flood of devastating images that show not just meteorological phenomena such as tidal waves and Hurricane Katrina, but also shots of more basic signifiers of human greed -- deforestation, a bloody slaughterhouse, fishermen draining the ocean of its wildlife and rush-hour traffic in downtown Los Angeles.