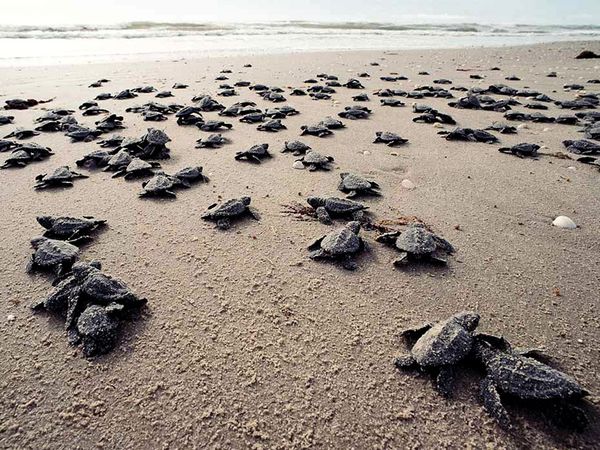 In their timely letter to Science, Plotkin and Bernardo make thier case for continued funding for endangered species recovery efforts, especially when demonstably successful. The gains for slow growing, late maturing animals like sea turtles can be unraveled in a few short years, as has happened in the past, without adequate protections.

Who will step up?

IN DECEMBER, AS WE CELEBRATED THE 40TH ANNIVERSARY OF THE ENDANGERED SPECIES ACT and all of its accomplishments, the U.S. Fish and Wildlife Service (USFWS) terminated sup- port for the recovery of an icon: the Kemp’s ridley sea turtle (Lepidochelys kempii). This sea turtle nearly slipped into oblivion in the 1980s, and controversial tactics were used to save the species (1). The Bi-National Recovery Plan for the Kemp’s Ridley Sea Turtle Program, sup- ported largely by USFWS since 1978, worked to protect the turtles, their eggs, and their off- spring at their primary nesting beaches in Mexico. As a result of these efforts, the num- ber of nesting females increased exponentially from only a couple of hundred turtles in 1985 to nearly 10,000 turtles in 2009. This is one of USFWS’s greatest conservation successes.

Unfortunately, the recovery of the Kemp’s ridley has come to an abrupt halt. Since 2009, the population increase has slowed substan- tially (2); the slowing rate correlates spatially and temporally with multiple natural and anthropogenic stressors in the Gulf of Mexico. Kemp’sridleyrequirescontinuedmonitoringandresearchtoassesstheimpactsofthesestress- ors. Calls for better science in the Gulf of Mexico in the wake of the Deepwater Horizon oil spill have highlighted the need to continue monitoring sea turtle nesting beaches to provide data such as nest counts and other demographic parameters that are essential to population assessments (3). Similar recommendations were made by a National Academy of Sciences study (4).

Scientists and leaders of nongovernmental organization and industry will meet in November 2014 to develop a plan for continued monitoring and to carry forward the efforts begun by USFWS almost 40 years ago (5).

The ridley case study exemplifies broader findings of both the efficacy of research and management funding for pulling species back from the brink of extinction (6, 7) as well as the apparent trend of stagnant or diminishing funding levels (8, 9). A recent analysis (7) shows that sadly, global expenditures on biodiversity conservation are woefully inadequate overall and uneven; nations that underfund conservation research relative to their expected capacity to do so also show a growth in the extinction status of their mammal faunas over a 12-year period beginning in 1996. International financial flows to underfunding nations are crucial to stem biodiversity loss (7), a conclusion that is highly relevant to the ridley as well.

9. Anonymous, “State of financing for biodiversity: Draft global monitoring report 2012 on the strategy for resource mobilization under the Convention” (2012); www.cbd.int/doc/meetings/cop/cop-11/information/ cop-11-inf-16-en.pdf.