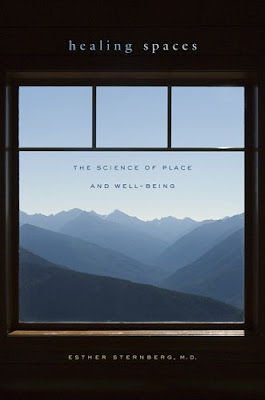 I have greatly enjoyed these two books. Moreso, getting to know the visions and work of the two people who have written them.

Listen to Esther discuss her important insights with Krista Tippett of On Being.

Who knew that the architect behind St. Paul's Cathedral was also an anatomist who diagrammed the human brain? Today, scientists of the brain are learning why our sensory experience in a place like a cathedral â the incense, the soaring music, the stained glass, and the light â is physiologically good for us.

"What is it about beautiful vistas of mountains, about the infinite horizon of the ocean, about a cathedral? There are certainly physiological and neuroscientific bases to that feeling, and I am convinced â I know â that these things can be measured. And that's the exciting new frontier for me, to ask exactly that question."

Esther Sternberg is an immunologist and a pioneer on this new frontier that's giving rise to disciplines like neuroimmunology and environmental psychology. Architects are working with scientists to imbue the spaces we move through â the sights, sounds, and smells of them â with active healing properties. And Esther Sternberg says all of us can create surroundings and even portable sensations to manage stress and tap our brain's own internal pharmacies.

The second is a new book called Blue Urbanism: Exploring Connections between Cities and Oceans by Timothy Beatley who argues that cities must expand their understanding of urbanism to include their impacts on the oceans. Tim's work puts some of Esther's ideas into physical practice.

"The trick is turning all those good feelings about oceans â and the charismatic sea creatures we all love: whales, sea turtles, sea stars, to name a few â into real urban policies and plans that protect oceans," he says.

"Tim Beatley provides a cogent argument for intertwining urban and natural worlds, especially for us on the continent's edge. As we add density, Beatley expertly argues that true sustainability must extend to the blue world that defines our globe and shapes our cities." - John Rahaim, Planning Director, San Francisco
Grab the books when you can, you'll enjoy the fresh ideas and feel like you're on the cutting edge of something very good that should grow.
Posted in Live Blue Blog