One man's hymn to the power of water 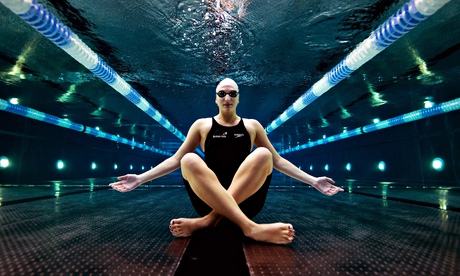 Ocean plants supply 50% of the oxygen in the atmosphere, and the sea provides much of the food we eat. It is the enabler of our leisure and, in many ways, our last resort. But friendly it is not. A couple of years ago, after one of my daily swims in the sea, I emerged from the freezing, out-of-season Cornish waters shivering more than usual. My friend Mark, whom I had persuaded to join me, looked at me with wonder. "You've turned blue," he said solemnly. I looked at my hands and arms, and they were indeed a pale indigo. Apparently my face was the same colour.

I don't think this is the sort of blue Wallace J Nichols is writing about. To be filed under "popular psychology", Blue Mind is a study in water and why it makes us happy. It's also, almost accidentally, a sort of autobiography. This handsome man – pictured in his author photo up to his neck in the sea, more Keanu Reeves in his surf-god pomp than lab-bound scientist – is the very embodiment of his theme. His is the blue of the Pacific and the so-called Slow Coast, "50 miles of cool, peace and quiet – just a jump south of San Francisco", where he and his fellow Californians take "unhurried" walks, "chill out" and "catch some waves". "The Slow Coast could be a place for you, too, to get your Blue Mind on," he prescribes. (Although it would rather spoil the effect if we really did all turn up there.)

Nichols believes we should all channel the putative blue in our heads, using water to detox our digital enslavement. Even taking a shower, or glimpsing a photograph of a river will do the job. Imagine, he says, how business negotiations could be facilitated if the interested parties adjourned to a hot tub. (He is quite aware of the Californian cliche at work in that particular scenario.)

The book presents anecdotal and scientific evidence. We have a selection of heroes, "outside kind of guys", who personify the blue mind – from Fabien Cousteau (grandson of Jacques), "heading deep underwater since he was four years old", to Van Curaza, who runs Amazing Surf Adventures, for traumatised servicemen. To back up his account of their experiences, Nichols provides precis of scientific papers that show how, for instance, students perform much better academically if taken out on watery wilderness treks. And throughout are his own epiphanies, so rhapsodic that they even take in a suicide and make it part of the feelgood theme. The cumulative effect is distinctly west coast, USA. Confiding, rhetorical, blissed-out, the writing seems to emerge from one of the flotation tanks Nichols uses to seek out his inner fish – "the closest you will ever come to having a drug-like experience without taking drugs", according to travel writer Seth Stevenson. The tone is that of an extended Ted talk, and the philosophy right-on.

"Blue mind"? Being a natural sceptic, I am wary of things as soon as they acquire a name (I write as a "wild swimmer" who hates the term). Once categorised, they become commodities, ideas to be sold. Of course, that's part of Nichols's mission. Hence his "Blue Mind" summits – annual assemblies of scientists, artists and musicians gathered to celebrate the world-changing potential of his idea. Anyone whose experience of the sea is limited to grey skies and the indignity of wriggling into a damp bathing suit on a rain-swept beach might well balk at such utopian talk.

And yet, at the heart of Nichols's book are real revelations. It is especially good in its examination of the mood-enhancing effects of water. Quoting Stephen and Rachel Kaplan, two environmental psychologists, he cites two states of mental attention: "directed" and "involuntary". The former represents is our alertness when applied to a task in hand – driving a car, sending a text, choosing what you want for dinner. The latter "occurs when we are in an environment outside our ordinary habitat, with enough familiarity that it poses no threat but enough interest to keep the brain engaged". It is this state of "drift" (itself a nautical term, as Nichols notes) that water encourages. We've all felt it. Staring at the sea, like one of Melville's hypnotised "water gazers", everything seems static, yet gently changing. Instead of the stress of addressing electronic data or dealing with the millions of different images we see every day, we're presented with a view where change is subtle and slow – a sailboat, a seagull, the incoming tide.

It is, Nichols says, "the inverse of our current condition of monotonous suffocation". And yet that state of drifting actually uses up a lot of energy– you have to work at being happy. Nichols quotes another scientist, MA Greenstein: "Drifting takes us into the default-mode network: the network that's active unless we are paying attention to something. In other words, it's basically 'online' until we call on other areas of attention. And the default-mode network devours huge amounts of glucose and a disproportionate amount of oxygen." At last – a justification for ice creams by the sea.

Not that Nichols is a slave to science and statistics. Unashamedly, he celebrates the spiritual connection that water provides. "We've so glamorised 'science' and what's seen as the 'western' mindset that the idea of sitting still in hope of transcendence seems comical, its practitioners worth mocking." Water, he asserts, "meditates you".

He digs into meaning and metaphor: "Water is both lover and mother, murderer and life-giver, source and sink … Water unleashes the uninhibited child in all of us, unlocking our creativity and curiosity." We intuit one another's feelings even before our conscious mind has had time to process them: empathy is central to his theme. If water allows us to release our inner selves, then it could be the antidote to the blue screens that keep us awake, nervy and twitchy. In a dehydrated, overheated world, it becomes perversely less easy to think the more we try. It's partly a process of ageing – Nichols points out that babies are born with 80% of their bodies comprised of water; thereafter, we gradually desiccate. And our aquatic guru has one simple prescription for our prune-like brains. "You need water. And water needs you now. I wish you water."

Almost against my will, I liked this book for its mad spirit. It is richer and more grounded than its post-new age, pop psychology tone might indicate. As Nichols says, it's no good bludgeoning people with gloomy statistics about polluted waters and acidifying seas. Better to invoke the positive, and stir their souls. And yet the open water, in its wild state, is no ally. It can rise up at will, and will do so. Stroll along the Thames at high tide, and one misstep and you would be lost, carried off by those swirling cappuccino waters. None of the technology of a 21st-century city, nor any upbeat philosophy, would save you. It is part of a river or ocean's power and fascination – that what gives us joy can so easily, and heartlessly, turn to watery doom.

• Philip Hoare's book The Sea Inside is published by Fourth Estate. To order Blue Mind for £15.49 with free UK p&p call Guardian book service on 0330 333 6846 or go to guardianbookshop.co.uk.