Teaching the World to Live Blue 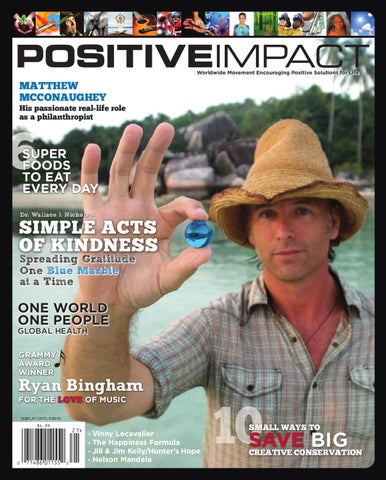 Read the article by Julie Starke in Positive Impact Magazine on Issuu here.

Deep in the redwoods of central California, also known as the ‘Slow Coast,’ lives a marine biologist and ocean advocate who is teaching the world what it really means to ‘Live Blue.’

While inhabiting a space shared with mountain lions and bobcats isn’t something you would expect from a person in love with the ocean, this scientist, activist and all around communicator is not your typical ocean-loving guy. Dr. Wallace ‘J’ Nichols, known as ‘J’ to his friends, approaches life a little differently.

A widely respected Research Associate with the California Academy of Sciences, a graduate of DePauw, Duke and Arizona Universities and a Fulbright Fellow, J’s resume comes with a long list of academic credentials.

He has authored scientific papers on sea turtle ecology and ocean conservation, has had his efforts featured in National Geographic, Time, and Newsweek magazines, and has served as a Senior Research Scientist at the Ocean Conservancy and as an advisor to countless students, governments and non-profit organizations. With all that said he is still, in every sense of the word, an independent scientist.

He is the guy who assembled ‘100 Blue Angels’ to support his unique and personalized work within the scientific community. His ‘angels’ are the base that fund his efforts in the field with sea turtle restoration, his activism with ocean conservation, and his desire to create meaningful conversations around all things blue.

He is the guy that terms his brand of commitment as ‘LiveBlue’ and has created a lifestyle around that very idea. His vision and dedication have allowed him to pattern a program that includes a mosaic of networks, knowledge and communication to meet people where they are and create synergy around the world.

He is the guy that believes the mind-ocean connection reaches far beyond what tradition dictates and, to prove it, assembled the first-ever BlueMind summit. It was here that leading neuroscientists, biologists, educators and creative minds came together to consider the effects of the ocean on the brain. It was, quite frankly, mind blowing and its success has led Nichols to begin the planning for BlueMind II.

And his most far reaching project to date? BlueMarbles.org, a grass roots movement of epidemic proportions that has taken the world of blue by storm and continues to reach into mainstream with its message of “random acts of ocean kindness”.

This scientist, often referred to as an ‘eco-warrior’, is becoming well known for his unique approaches in a world usually reserved for logic and reason. His strategies are creative, deep and meaningful, and oftentimes ‘off the cuff’ and ‘out of the box’ but they are leading the way in creating a community of like minded people who, simply put, love the ocean and aren’t afraid to say so.

Blue Marbles Are Rolling Around the Globe.

In 2009, Nichols was asked to speak at a conference celebrating the upcoming 100th anniversary of Jacques Cousteau’s birthday, the well-loved pioneer of the oceanophilia. It was here that he spontaneously purchased blue marbles and handed them out to his audience on their way into the cavernous IMAX theater. At the end of his presentation he told attendees that the marble they held represented what the earth looks like from a million miles away - small and blue.  And, that if we didn’t take care of ‘our little blue planet,’ we were going to be in deep trouble.

‘The marble,’ he explained, ‘has been given to you in gratitude for the work you are doing in the world. Keep it until you find someone that inspires you. Then pass it along.’  With that simple message, the Blue Marbles Project, a viral movement based on simple acts of gratitude, was born.

This expansive idea has taken the ocean conservation message to a new high. Oftentimes a circulatory path within its own community, ‘J ‘and his blue marbles project has brought ocean awareness within reach of the masses. Upwards of a million marbles are circling the globe sharing a message of gratitude and bringing a greater awareness to the world., one marble and one person at a time.

‘There is something about holding a blue marble in your hand that makes you feel like you are part of something bigger than yourself,’ comments Sarah Kornfield, a fellow collaborator on the Blue Marbles Project. ‘ We’ve seen people from all parts of the globe marvel at a marble and kids adopt it as their own. It’s a powerful movement that brings a sense of meaning to both the giver and the receiver.’

The stories and outcomes of the simple act of sharing a blue marble have been blanketing websites, social media and the community at large. A blue marble has landed on the Jamaican team’s sled in the Alaskan Iditarod race; and Avatar filmmaker, James Cameron, will take his along as he heads to the bottom of the Mariana Trench.

The kids at Rooftop School in San Francisco have sent their blue marbles all over the world in small origami boxes made of old maps. Thirteen year-old Ben shared blue marbles at his Bar Mitzvah, calling it Ocean Mitzvah, and starting a trend among his peers. Six thousand marbles landed at Auburn’s Lives of Commitment event in New York City, where they became the symbol for connection and compassion.

A Decade of Blue Ahead.

So, it has become apparent that this scientist knows how to incorporate social networking,  community organizing, and creative communication to inspire a healthy relationship with the sea. It is something that comes naturally to him and one that has propelled him to become the voice for the worlds’ waters.

His ‘Live Blue’ message is coming alive through the steady support of his ‘100 Blue Angels,’ his network of Blue Marbles Project givers and receivers, and the creative communication behind his ‘Blue Mind’ summits.

It remains to be seen what this pioneer will do with the coming decade. But remember, this is the guy who founded Ocean Revolution to mentor the next generation of ocean conservation leaders, trekked from Oregon to Mexico with his family to bring attention to coastal and ocean issues, and connected with a toxicologist and a NASA pilot, grabbed his flip video, and filmed the gulf oil spill in order to find, and report, the truth.

“It’s time for me to structure the next ten years of work,’ says J. ‘I know that the future is about gratitude, giving, and kindness. We intend to share that message with the entire world. If a blue marble helps as a reminder to live like you love the ocean, and appreciate the ocean’s beauty, abundance and mystery, then we are on a good path.’

Nichols notes that because the project started with no budget, is widely decentralized and dispersed and open to everyone, there’s no conceivable way to stop it. That’s just the way he likes it.

With this man’s goal of passing one blue marble through the hands of everyone on the planet, one thing is certain: the gifts that this scientist brings to the world are going to speak to the heart of humanity, will be centered in gratitude, and will, most assuredly, be wrapped in blue. Of that you can believe.