A Story of Being True To Yourself 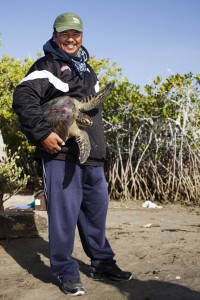 When you first meet Julio Solis, you may think he’s just another member of the Baja Vigilantes crew – and he probably wouldn’t have it any other way. But Julio has had to stand apart from his culture, his community, and even his family upbringing to stand up for Magdalena Bay.

When you grow up in a fishing town in Mexico with little money, you eat what the oceans provide. Sea turtles had long been a part of that diet, and Julio remembers learning as a child how to fish for sea turtles from his father, whom he looked up to. When he was older and just starting to raise a family, sea turtle fishing was banned, but he poached in order to survive. In the film he Describes the empathy he held for sea turtles throughout his life. Although he felt this connection when he was a poacher, at the time he said he just didn’t know another way.

Then, still a young man with a growing family, Julio learned from an unsuspecting mentor, Wallace J. Nichols-that the real work to be done was found in protecting the turtle. Despite some criticism from his community,he took on the challenge he knew was right. He founded, with a few of his peers, Vigilantes Bahia Magdalena or Magdalena Baykeepers.

Beyond sea turtle conservation, Magdalena Bay still faces a host of threats including urban and industrial pollution, poaching and overfishing, and destruction of habitat from massive tourism development. With these struggles comes success. After an environmental assessment was done on a development site, it was concluded that the impact would have grave effects on the surrounding area. As a result of Julio’s persistence inthe case, plans for the development project were repealed last year. This campaign was a tremendous victory in the protection of the Bay, and has provided momentum and hope to other communities fighting against a rising tide of inappropriate development in Baja California.

Julio was chosen to be featured as a MoveShake story because he is a wonderful example of what it means to be true to yourself. Not only have Julio’s conservation efforts grown, but his attitude towards making a difference has made him a pillar in his community and role-model to his own children and future generations.

Find out more about the work of Vigilantes Bahia Magdalena

Learn about the organizations that support Julio’s work -