July 30, 2008, Greencastle, Ind. - "Plastic does not biodegrade," writes Dan Haifley in California's Santa Cruz Sentinel. "It undergoes a solar-driven process called photodegradation," he reports in an article that includes a quote from Wallace J. Nichols, senior scientist at the Ocean Conservancy and 1989 graduate of DePauw University. 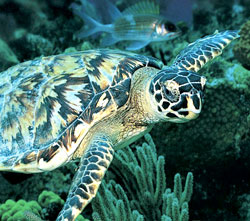 of photodegradation: "The sun breaks down the plastic into smaller pieces called nurdles, which retain the plastic's polymer structure. So, much of the millions of tons of pollution in these garbage patches consist of ubiquitous nurdles in a watery soup. In the North Pacific gyre, plastics outnumber surface plankton six-to-one, according to Capt. Charles Moore, the leading researcher."

The story notes that there are "two concentrations of mostly plastic garbage caught in swirling ocean gyres between the U.S. and Japan. Similar phenomena exist around the globe. But they aren't just floating landfills that can be fixed by removing trash."

J. Nichols, who goes by his middle initial, had an op-ed published last month in the Sentinel. He appears in Leonardo DiCaprio's documentary, The 11th Hour and was one of nine "eco-all-stars" cited in the March 2008 issue of Outside magazine.  Nichols also was one of the participants in DePauw Discourse 2007. A summary of his remarks -- including video and audio clips -- can be found in this previous story.