This is Your Brain on Aquariums 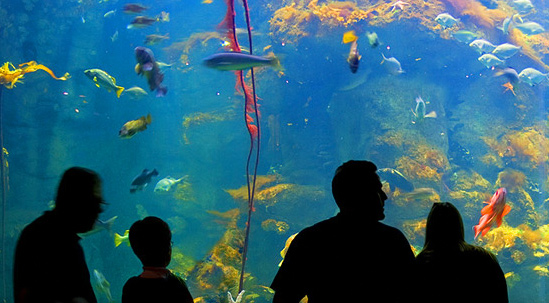 People who spend time watching aquariums and fish tanks could see improvements in their physical and mental wellbeing, according to new research published in the journal Environment & Behavior.

In the first study of its kind, experts from the National Marine Aquarium, Plymouth University and the University of Exeter assessed people’s physical and mental responses to tanks containing varying levels of fish.

The team found that viewing aquarium displays led to noticeable reductions in blood pressure and heart rate, and that higher numbers of fish helped to hold people’s attention for longer and improve their moods.

Whilst spending time in ‘natural’ environments has been shown to provide calming effects on humans, there has been very little research into the role that underwater settings could have on health and wellbeing. Deborah Cracknell, PhD Student and Lead Researcher at the National Marine Aquarium, conducted the study and believes it provides an important first step in our understanding:

“Fish tanks and displays are often associated with attempts at calming patients in doctors’ surgeries and dental waiting rooms. This study has, for the first time, provided robust evidence that ‘doses’ of exposure to underwater settings could actually have a positive impact on people’s wellbeing.”

The researchers benefited from a unique opportunity in order to conduct their study when the National Marine Aquarium refurbished one of its main exhibits – in a large 550,000 litre tank – and began a phased introduction of different fish species.

They were able to assess the mood, heart rate and blood pressure of study participants in precisely the same setting as fish numbers in the exhibit gradually increased.

Dr Sabine Pahl, Associate Professor in Psychology at Plymouth University, said: “While large public aquariums typically focus on their educational mission, our study suggests they could offer a number of previously undiscovered benefits. In times of higher work stress and crowded urban living, perhaps aquariums can step in and provide an oasis of calm and relaxation.”

Dr Mathew White, an environmental psychologist at the University of Exeter, said: “Our findings have shown improvements for health and wellbeing in highly managed settings, providing an exciting possibility for people who aren’t able to access outdoor natural environments. If we can identify the mechanisms that underpin the benefits we’re seeing, we can effectively bring some of the ‘outside inside’ and improve the wellbeing of people without ready access to nature.”

The study Marine biota and psychological well-being: A preliminary examination of dose-response effects in an aquarium setting is published in the journal Environment & Behavior on Thursday 30th July.

Deborah Cracknell is a marine biologist and lead researcher at the National Marine Aquarium, Plymouth, United Kingdom. She is also undertaking a psychology-based PhD student at Plymouth University researching the relationship between aquarium environments (specifically, types and levels of subaquatic biodiversity), and human health and well-being outcomes.

Sabine Pahl is an associate professor (reader) in the School of Psychology at Plymouth University. Her research interests are social cognition, restorative effects of natural environments, and the psychology of sustainable attitudes and behavior espe- cially applied to energy and protecting the marine environment.

Wallace J. Nichols is a marine biologist interested in ocean conservation, especially relating to sea turtles. He is also interested in the psychological benefits and cognitive effects of engaging with aquatic environments.

Michael H. Depledge holds the chair of environment and human health at the University of Exeter Medical School and is visiting professor at University College, London. He is a former commissioner of the Royal Commission on Environmental Pollution and former chief scientist of the Environment Agency of England and Wales. His research interests include the impact of environment on health and well- being, the effects of chemical body burdens on human health and the environment, and finding ways of communicating scientific information to policymakers and politicians.