May 24, 2009, Greencastle, Ind. — An Indianapolis Star article on efforts to make the Indianapolis 500 more environmentally friendly notes that the race recently switched to biodegradable latex balloons for the traditional balloon launch. "But any time you disperse massive amounts of waste randomly with no way to get it back, it's just pollution," Wallace J. Nichols, co-founder of Ocean Revolution and 1989 graduate of DePauw University, tells the newspaper. "There's no way to responsibly do a balloon release."

The article by Will Higgins adds, 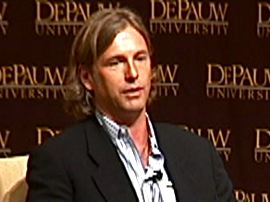 as an alternative, "Nichols suggests the release of a bird, one that had been injured then nursed back to health by humans -- 'a golden eagle, or a bald eagle, or if not a hawk -- something the crowd would be into.'"

Read the story at IndyStar.com.

J. Nichols, who goes by his middle initial, is a research associate at California Academy of Sciences and was seen in Leonardo DiCaprio's documentary, The 11th Hour. He recently joined the board of directors of Save Our Shores, a non-profit marine conservation organization in Santa Cruz, California. Learn more in this article.